Solar energy is the power provided by the sun, harnessed through technology called photovoltaic (PV) cells, which turn sunlight directly into electricity.

For a layman’s description of the “photovoltaic effect,” when sunshine hits the PV cell, the photons of light excite the electrons in the cell, causing them to flow and generate electricity.

Homeowners around the country, and cities around the world, are installing solar panel systems on their roofs to take advantage of this clean, renewable way to generate power.

So why should you go solar? How does it benefit you?

Here are 10 of the top motivations for homeowners and business owners–and even some renters–to make the switch from traditional electricity to solar power.

Unlike conventional power, solar produces no harmful emissions that hurt the environment. It’s a clean, renewable process that uses the most natural of all resources: the sun.

Even the energy used to produce the PV cells is paid back soon after. Depending on the type, Energy Pay-Back Time (EPBT) for PV and CPV systems is estimated to be between 0.5 and 1.4 years. After that point, it’s all renewable, all the time.

In the U.S., fossil fuels are used to generate 68% of the electricity we consume, and the resulting emissions from the combustion of those fuels aren’t good, including:

Compare all that with the emission-free technology of solar energy and solar becomes the obvious solution.

It’s fair to say that many of the home improvements that you will make won’t add quite the equal value to your house as the money that you put into them.  Solar energy, on the other hand, will save you money from your energy bill each month.

In addition, the investment that you make in solar, will add its exact property value–or more–to your home, should you decide to sell it later on.

A study by Lawrence Berkeley National Laboratory in California showed that across the board, buyers were willing to pay $15,000 extra for a home with an average-sized solar panel system. Not only is this likely to amount to more than your original investment, it’s a return on investment that is in addition to the money you have saved on energy all the while that you owned the house. 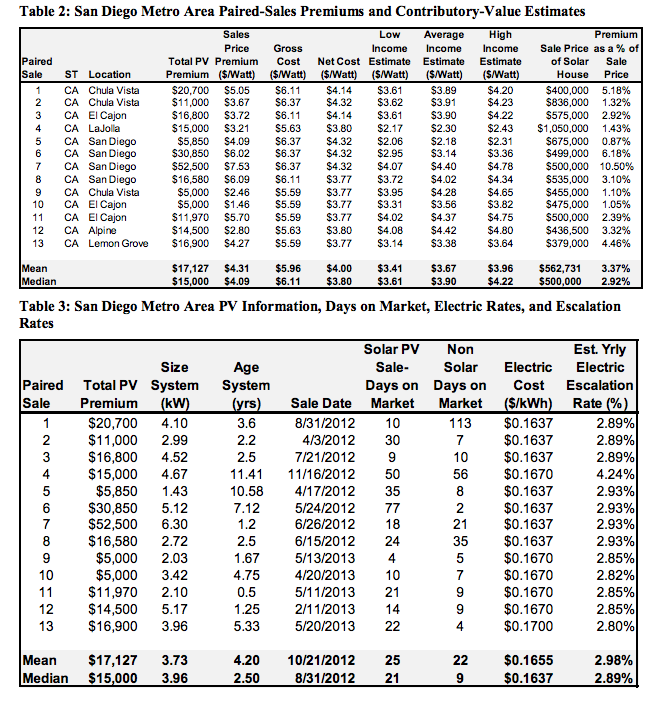 In a challenging market, solar panels can even be the difference in selling your house or not, an added bonus that gives potential buyers a reason to consider your house over others as their next long term home.

Additionally, in most states solar panels will not increase your property taxes. 38 states currently have property tax exemptions that exclude the added value of a solar panel system from being considered in the valuation of a property for taxation purposes.

Solar panels have no moving parts, and so are not damaged easily.  This lowers the chance for an interruption in service.

All solar panels are exhaustively tested to ensure that they can withstand high winds and extreme weather conditions, such as hail and heavy snowfall. Every solar panel used by skilled installers such as 1st Light is guaranteed to be as strong or stronger than your roof itself.

Even if something should occur that damages your solar panels, most systems come with a 30 year warranty, guaranteed by the original installer, that covers serious damage to the panels.

Some states, the Renewable Portfolio Standard (RPS) requires electricity suppliers to secure a portion of their electricity from solar generators. Rather than investing in systems of their own, in applicable states this has resulted in what is called an SREC market. Solar Renewable Energy Certificates (SREC) are created for every megawatt-hour of solar electricity created. So if your system is consistently generating more energy than you are consuming, you have the opportunity to sell that energy back at a premium.

Every state’s program is different, with the value of an SREC determined by the market and subject to supply and demand constraints.

In most other states, even those that are not yet participating in an SREC market, any excess solar energy that was generated but not consumed can be pushed back onto the grid, to be sold back to the electricity provider. Many utility companies are required to purchase this excess generation, even if it is usually bought at a reduced rate.

5.)    Solar could help you afford that home improvement you’ve been wanting.

Installing a home solar system offers an opportunity to design other home improvements with that addition in mind. For instance, some people consider a swimming pool or hot tub with renewable energy in mind. According to a report from the National Resource Defense Council, pool owners typically pay $500 more per year in energy bills. By combining the two home improvements, your solar system can be designed to cover the extra energy usage, using one investment to pay for the other.

Plus, remember the money you’ll be saving on electric bills and it all adds up to enough to make whatever home improvements you desire. There aren’t many home improvements that cost less than a solar panel system or are subject to tax credits from the government, and none of them save on monthly costs, instead often costing more. No home improvement can be more worth your money than a renewable energy system.

Electricity from utility providers is never guaranteed a set price, rising and falling seemingly without cause or effect. And without any other option, consumers have no choice but to pay whatever the current price is. 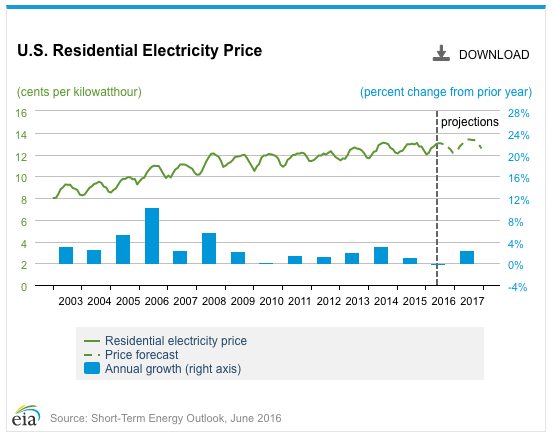 The cost for a solar system, on the other hand, remains the same. If you choose to lease or finance your system, then you have a set, minimal monthly payment that replaces your electricity bill. If you purchase your panels in full, from then on your energy cost becomes $0.

The signs are everywhere. Even pushing against the agendas of fossil fuel companies and dirty energy generators, the future of energy is renewable and clean energy.

For the first time in 2016, renewable energies will make up most of this year’s additions to the power grid. Solar, natural gas, and wind together make up 93% of the total  26 gigawatts (GW) of utility-scale generating capacity that will be added this year.

The U.S. has risen to the 4th highest usage of solar PV power, still lagging far behind China, Germany and Japan in cumulative solar capacity. And just as with any major change, every person, every step helps! 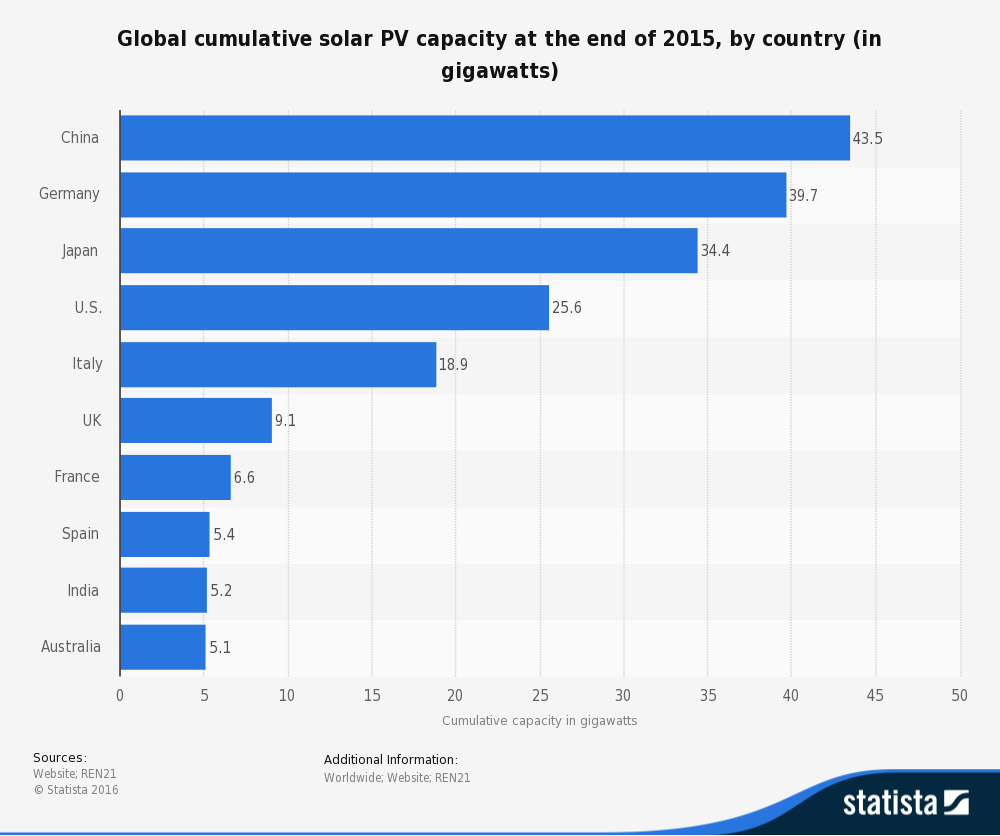 San Francisco is one such step toward sustainability, as it recently voted unanimously on a city ordinance that would require all new buildings to have solar panels. It is the first requirement of its kind in the United States, following the lead of France from the previous year.

By converting to solar energy now, you have the chance to be one step ahead, to join the innovators and trailblazers around the world.

One of the many myths about solar power involves perceived limitations on the energy-generating potential of solar panels. Solar energy is generated from daylight, not sunlight. So even on cloudy, rainy days, your panels will be working to produce energy. All that energy accumulates in the morning and afternoon hours, the whole time that the sun is up, producing more electricity than you can use.

Currently, all solar energy providers keep you connected to the grid. So any excess energy is pushed back onto the grid, actually causing your utility meter to spin backward, crediting your account. Then, in the evening hours, you will be using the credited energy from the meter. This excess energy does not expire and is similar to rollover minutes with your telephone company.

Let’s face it, what’s cooler than the sun powering your home?

And that is quite literally true. One study by UC San Diego Jacobs School of Engineering found that PV panels act as “roof shades” to keep buildings cool, in addition to supplying them with clean power. This makes sense. Solar panels soak up the sun’s rays, directing them away from the roof, whereas a roof without panels would allow heat to penetrate through it into the inside of the building.

When calculating the amount saved on cooling the building, the research team found that it was equal to getting a five percent discount on the solar panels’ price of the lifetime of the system.

But the “cool factor” is ever-present with solar energy too.

Just look at the world’s first solar road, opened in the Netherlands in November 2014 and performing even better than expected. In its first six months it produced 3,000 kilowatt-hours of energy, enough to power a single small household for a year. Plus, it was built specifically for bike traffic, and has welcomed hundreds of thousands of cyclists along its energy efficient path.

The application of solar power is limitless! Ever need energy in hard to manage places? Solar to the rescue!

And since your house is the single biggest consumer of energy you will ever have, why not start there, standing out in the coolest way under the sun?

Whether you’re spending money to make an investment in solar energy, or giving that money to your utility provider, it is still money that is being spent. Deciding to go solar is very much similar to deciding to purchase a home.  You can invest in yourself and take control of your energy costs, or continue to pay your utility provider for rented energy monthly, owing them frequent payments and remaining subject to their fees and requirements.

Every step towards independence, from owning a home to controlling your energy, gives you the freedom to make additional choices about how you live and own your own life. Going solar, purchasing a solar energy system for your house, is a way to invest in yourself and your family, and makes a big statement about how you choose to spend–and consume–your resources.
Just think…this could be you!

Or request a quote at:
www.1stlightenergy.com/request-a-quote/

To learn more about solar energy, contact us. One of our solar educators can answer all of your questions.
Learn About Solar
What’s in Your Solar System

Knowing Your Options
Scroll to top