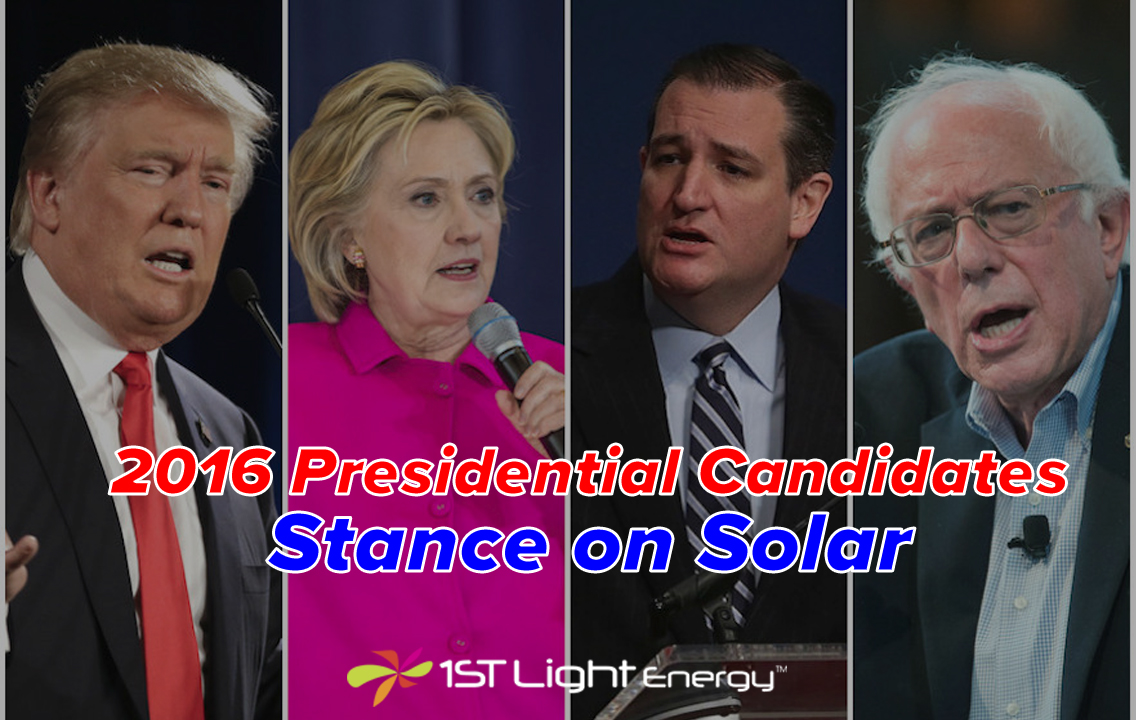 With Trump’s spotlight-stealing boldness and the possibility of electing our first female president, this has been an exciting presidential election thus far.  But what about the future of solar?  Where does each candidate stand when it comes to supporting solar energy initiatives for the American people?

For many voters, this is an issue that matters.  It’s tied in closely with the larger issue of climate change, which was recently named the “greatest threat to future generations” by President Obama.

But no matter how you feel about the hot issue of climate change, solar is something we should all care about.  The solar industry now employs more people than the coal industry, and technological advances in the past few years make solar feasible for more households than ever before, and at a much lower cost.

Here, in a quick and easy summary for your entertainment, is how each of the candidates fares on the solar-friendly scale.

I want to have half-a-billion more solar panels deployed in the first four years.

Her opinions on solar (and on renewables in general) are well-known and highly regarded among many in the industry, and amongst those who care deeply about such issues.

Her plan, which was recently unveiled, also includes generating enough clean energy within 10 years to supply every home in the country with power.

She advocates for bringing solar technologies to low-income communities, citing power plants and other polluters as one cause of high rates of asthma deaths in black children, who are more likely to live near those pollutants.  She plans to invest in research and infrastructure for clean energy, including solar, which some voters will find worrisome for financial reasons…but that’s another topic!

As you might have guessed, Bernie Sanders is very much pro-solar.  In fact, he brings a sense of urgency to the matter, tweeting last year that “we need to act immediately” and move to 100% renewable energy.

His climate change plan is to replace all nuclear energy sources with solar and wind.

But that doesn’t change Donald Trump’s hard stance on what he mysteriously calls “unproven technologies.”  In an interview with Greta Van Sustern, Trump said:

On that, he’s just plain wrong.  A quick search easily reveals several sources citing much shorter payback periods.  Of course the geographical location is a huge factor, but even in places like northern Europe, payback time has been on a steady decrease for years now.  We have ever-improving solar technology to thank for that.

PV systems in Northern Europe need about 2.5 years.  The National Renewable Energy Laboratory, a federal agency, reports that it takes only 1 to 4 years for rooftop PV systems to balance out the cost of making the system in the first place.

Although Trump reserves his true and passionate hatred for wind power, he’s not very solar-friendly, either.  On the one hand he cites a long pay-back time, but on the other hand he criticizes government tax breaks for solar installations.  It’s part of his anti-big government stance.

Ted Cruz is no more friendly to solar energy than Donald Trump.  Let his voting record as a senator speak for itself:

In 2015, Mr. Cruz voted against initiatives that would have made possible the installation of 10 million rooftop solar panel systems.

Kasich is one Republican who doesn’t seem to have it out for solar energy.  In his words, “I happen to believe in solar energy,” and he states that solar (+ wind) subsidies are “okay.”

While those aren’t exactly earth-shattering legislative proposals, at least he’s not citing incorrect stats or, as Governor, voting against renewables like solar.

On the negative side, he states that job creation in solar is all happening in China, when we know that’s not true either.  The solar industry now employs more people in the U.S. than the coal industry.

A lot of the solar businesses, by the way – you know where they are? They’re in China. They’re not here.

Not surprisingly, it seems the Democrats have a more solar-friendly outlook.  The Republicans, on the other hand, range from outright unfriendly policies to perhaps letting others decide, like the states or local governments.

To learn more about solar energy, contact us. One of our solar educators can answer all of your questions.
Learn About Solar
7 Reasons to Feel Good About Going Solar

Your Next Weekend Project: Rid Your Home of Phantom Energy Hogs!
Scroll to top