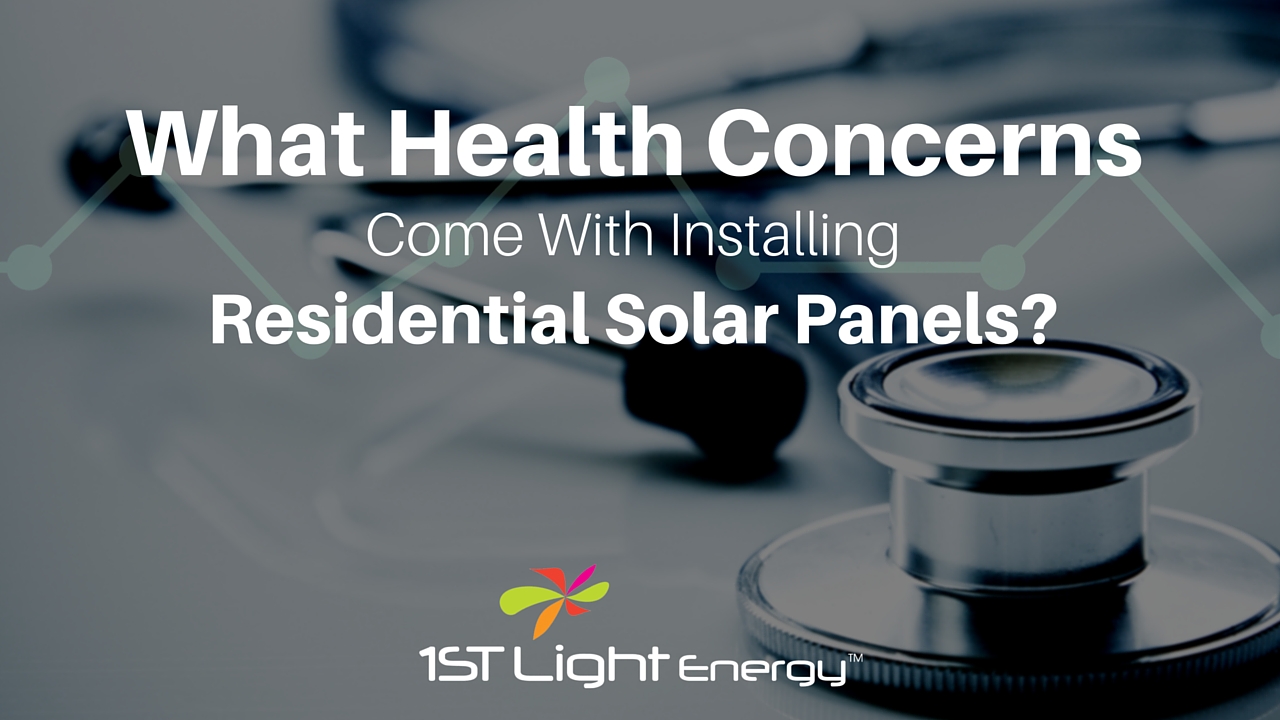 Buzzwords and misconceptions have gotten our species into a lot of trouble over the years, as we fear or find things around us according to information that may not be the most accurate.

Of course, anyone interested in investing in new solar panels should do thorough research, consulting the experts in health and solar energy systems. And as such experts, let 1st Light Energy dispel any health concerns.

The Truth About Ultra-Violet Light

While it may seem like a large amount, the frequencies of UV light absorbed by solar panels are actually less than those of the average cell phone. So unless you would give up your cell phone, there’s no need to worry.

Actually, present-day solar panels don’t even use UV light for energy, though new technological breakthroughs are leading in that direction. Instead, the far ends of the light spectrum, UV and infrared, are simply absorbed as heat by solar panels. This is no different, in essence, than what a sheet-metal roof does. Fluorescent lights, however, do use UV light, sourced via tube-internal, mercury vapors. The white coating inside the fluorescent bulb’s glass converts this UV light to visible light. So there is more reason to be concerned with light bulbs inside your home than with solar energy panels on top.

Another stone thrown at modern solar panels is that they are radioactive. In that sense, your radio also uses radio waves, and so can (technically) be called “radioactive”.

The inverter, which converts the immediately produced DC current to usable AC current, is said to be the problem. The wires connected to the inverter are sometimes said to “act like radiation antennas” and wreak all kinds of health havoc even hundreds of feet away. New, more efficient, batteries used in solar panels during a blackout are also named as a culprit in this “radioactive crime.” The extremity of the claim, combined with the quick sales pitch for DC-current-only solar cells that often follows these claims ought to be tip offs.

A final assertion that is sometimes made is that solar panels contain toxins present in heavy metals used in their construction. For the most part, this is not true. Copper, silicon, and aluminum are the most common components. However, there are some varieties of photovoltaic solar panels that do contain cadmium and selenium, and up and coming panels look like they will have traces of heavy metals like indium, gallium, and nitrogen. Yet, these systems bind all potentially toxic metals to other elements and then tightly enclose them in the inner depths of the solar cell. Modern solar cells are severely tested to stand up against wind, rain, hail, heat, and other outdoor challenges. Even the little bit of toxins present in certain solar panels are in a relatively harmless form and are tightly sealed off.

The Future Prospects of Solar Panels

Solar energy is getting cheaper, more common, and more efficient. At present, only about 30% of the light spectrum is used by any given panel, and this is a great improvement over earlier models. The ability to harness the full light spectrum is nearly within reach, however.

Take silicon panels as an example. They are highly efficient with red light but not with blue light. Each type of metal that is laid in a thin layer across a solar panel reacts differently to different light wavelengths. Red light causes the electrons of the metal silicon to be displaced, move about, and generate electricity. Blue light does not much affect silicon, however.

Future solar panels are going in the direction of “stacking.” Each layer of the panel will have a thin, metallic coating that reacts to a specific light frequency. There are even metals that could be used to take advantage of UV light, which is actually the highest-energy light in the spectrum. Nothing seems, as yet, to get much out of infrared, however.

Light would hit one layer of the panel after the other, and each layer would react to a particular “color” of light. This could lead to 90% or more efficiency and a huge boost in how much solar energy a panel produces.

Despite a recent battering with claims that solar panels are a health hazard, solar energy is progressing by leaps and bounds. UV light, radioactivity, and toxic metals have been used as reasons to call solar energy “dirty electricity.” Still, where is little evidence that anyone has been actually harmed by a solar panel just doing its job.

To learn more about solar energy, contact us. One of our solar educators can answer all of your questions.
Learn About Solar
The Durability of a Solar Panel: Strengths, Weaknesses and Troubleshooting

What Does the Future of Solar Hold?
Scroll to top