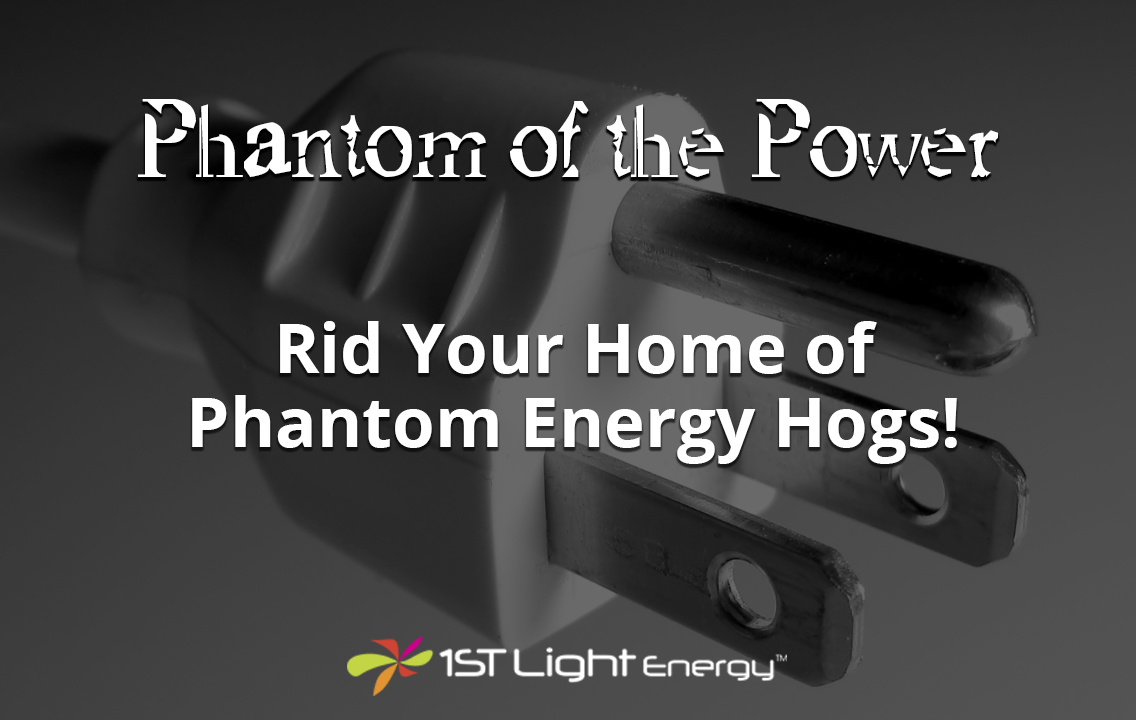 Some people may live in tiny apartments, but their energy bills are huge.  It’s not because they crank the AC or use the heat with a window open, either.  And no, they don’t own a pre-1980s refrigerator.  Their problem is phantom energy hogs.

Phantom energy hogs are the little things that add up.

While maintaining a comfortable temperature within your home is probably your largest energy hog, it’s the smaller energy drains which go undetected that can add up and increase your energy bill by as much as 15% in some cases!

Every home has several phantom hogs.

Since going solar naturally goes hand in hand with energy conservation, it’s good to seek out phantom energy hogs in your home.  Our federal government’s Department of Energy estimates that the average American home has between 20 and 40 of these devices!

Without trying too hard, you can probably come up with a handful of appliances in your home that carry a phantom load.  Anything with standby power (or a digital readout that’s always on) is running up the meter, using your electricity silently and secretly like a ghost.

That means your microwave, your coffee maker and your coffee grinder are main sources of phantom loads.  It’s nice to have a clock readout everywhere you look on all your appliances, but do you really need that?

You wouldn’t think the readout on your coffee grinder could break the bank…and it doesn’t.  It’s the accumulation of those 20-40 appliances, all carrying phantom loads, that does add up over time!

Some appliances and devices use energy whether they’re being used or standing idle, waiting to be of service.  As long as they’re plugged in, they’re using power.

Anything with a black box attached to the power cord uses standby power.  It’s sitting there all day and night, converting AC into DC, just so the item can be ready when you are.

Key indicators that an appliance or device has standby power:

Malfunctioning appliances can become HUGE sources of phantom energy use.

When your appliances are not functioning properly, they can waste a lot of energy.  A broken electric heater, for example, when left plugged in can eat up a lot of electricity.  And even if it’s not giving off any heat, it can be working hard behind the scenes, trying to make heat and using lots of energy in the process.

Other broken appliances that add to your phantom load could include:

Which appliances are to blame in your home?

To cut your phantom load and reduce your energy consumption, first you’ll have to figure out which appliances and equipment in your home are causing the load.

We’ve already told you how to guess which devices are the culprits, but did you know there are also devices which will help you know for sure which appliances are using the most electricity?

We’ll cover energy monitors in more detail in another post, so let’s move on to what you can do about your own phantom energy hogs…

How to cut your phantom load and save energy.

Even if you don’t end up springing for an energy monitor, you can make a pretty good guess as to who’s hogging the energy in your home, even if it’s bit by bit.  Make a list…then ask yourself which of them can be unplugged when not in use.

Here are some common culprits that can be unplugged without causing much inconvenience:

People who care about phantom energy use often use power strips to solve the problem.  When appliances are plugged into a power strip, one  on/off button turns everything off at once, making it far more convenient to save energy.

Getting into the habit of unplugging appliances and devices after you use them might seem inconvenient, but once you watch the accumulated savings start to roll in, you’ll be glad you made the effort to rid your home of phantom energy hogs!

To learn more about solar energy, contact us. One of our solar educators can answer all of your questions.
Learn About Solar
The 2016 Presidential Election: Where do the Candidates Stand on Solar?